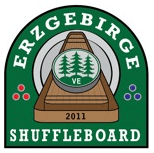 Is shuffleboard a game of chance or skill?

“Though the defendant kept a public gaming table, as charged, and though diverse persons played thereat and bet spirituous liquors on the game, the game was not a game of chance, but was altogether a game of skill.”